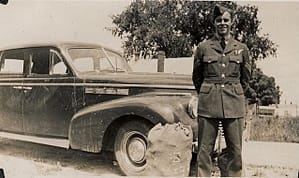 Flight Sergeant D.J. Heath, Royal Canadian Air Force, 23, reported missing on August 28, 1944, was assumed to having been killed on that raid when his plane was shot down over Szony, in North Hungary. Heath received his gunner’s wing at Mont Joli, Quebec in July 1943 and went overseas in August of the same year. In March 1944, he and his all-Canadian crew were posted to a Royal Air Force Pathfinder Squadron and it was while engaged in Pathfinder work that his plane was shot down. A native of Portland, Ontario, Heath joined the bank there in March 1941 and enlisted in the Royal Canadian Air Force on November 14, 1942.